February 13, 2020 Works crews are out finishing up clearing Village roads, and will be salting again to keep pavements clear. Temperatures and blowing snow still present a risk of slippery roads however, so please drive with caution today.

At the beginning of all snow events, the Public Works Departments begin the process of snow and ice removal operations. Each event has its own unique characteristics with a variety of conditions such as wind, temperature, timing and moisture content. Our approach to snow removal must remain flexible to address these variables. During light to normal snowfall, roads will be plowed to their full width as soon as possible following an initial pass. During heavier snowfalls, roads will be widened as the storm intensity lessens. After a storm passes, clean-up operations will begin in order to fully clear intersections, remove snow piled in right-of-ways and cul-de-sacs, and salt the cleared roadways to prevent subsequent ice formation. In the event of rain preceding a snow event, trucks may ‘pre-salt’ in advance of plowing operations. Please be aware that the effectiveness of salt depends on a number of factors, including traffic volume, pavement type, sun/shade, and temperature. Our trucks move at slow traffic speeds, and occasionally need to reverse so please maintain a minimum distance of 100’ behind plow vehicles at all times.

Village Ordinance 72.50 establishes that ‘It shall be unlawful for any person to park any vehicle on any public street or portion thereof within the Village at any time within 12 hours after a snowfall of 2 inches or more has occurred.’ The Village will do its best to notify residents when this ordinance is in effect via social media, television, and radio outlets, but as a matter of policy, a Snow Emergency is declared after 2” of snow accumulation. Keeping the roads free of parked vehicles is critical to both safe snow clearing operations and to avoid potential damage to private vehicles.

The End of Your Driveway:

During the snow plowing process, trucks push snow from left to right along the blade of the plow, moving snow from the center to the edge of the road. The discharge from the plow is distributed along the curb or aggregate shoulder along the ditch line. This discharge, unfortunately, leaves a small row of snow long at the ends of driveways located along the route. While this is certainly aggravating, this natural result of plowing is unavoidable. Placing snow cleared from your driveway to the right side of your drive (away from approaching traffic) may help to minimize this inconvenience. 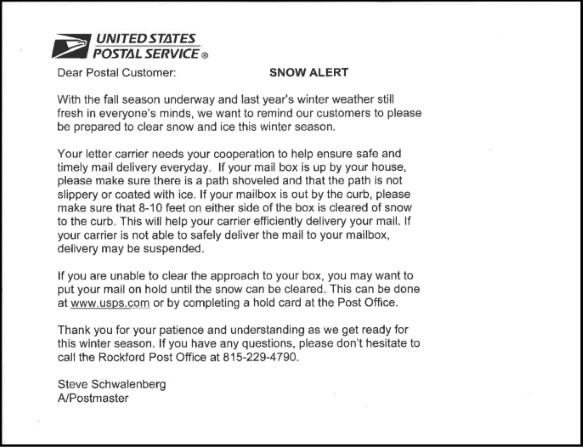 Every owner of residential or commercial property within the Village which contains or abuts a paved public sidewalk shall remove snow and ice within 12 hours of the completion of any snow event which results in accumulation. After initial clearing residents shall maintain sidewalks in a reasonably clear condition. Residents shall not deposit snow onto or across public roads while removing snow from driveways, sidewalks, or other parking areas. Residents shall place garbage and recycling containers clear of public roads during snow events.

Obstructions: Some residents elect to extend landscaping into the public right-of-way, including items such as rocks, timbers, walls, and plantings. These improvements are prohibited by ordinance and damage to such shall not be the responsibility of the Village. Snow events can also be hard on mailboxes. Most mailboxes if properly installed will withstand snow and slush discharged during plowing operations. The Village is not responsible for damage caused by snow and slush. There may be times however during difficult operations when we inadvertently come in contact with and knock over a mailbox. In the event that damage has been caused by our plows, a Supervisor will investigate the claim. Upon determining that the Village is at fault (and providing that the mailbox complies with USPS regulations), the Village will replace the mailbox with a standard wooden post and regulation mailbox. Custom mailboxes may be provided by the homeowner for installation by Village personnel.

Please call the Public Works Department at (815) 877-0746. Office hours are 7:30am to 3:00 pm Monday through Friday. Afterhour messages will be addressed as soon as possible the following workday. Please be aware that snow crews are often working through the night, so your patience is very much appreciated.